What Is Constructive Emancipation For Child Support In New York? 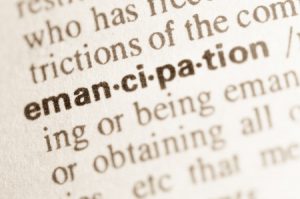 New York State law defines legal emancipation as a child attaining the age of 21.  However, there are events that may occur that would prompt a Court to determine that parents are no longer obligated to pay child support for their child, even if the child is under the age of 21.  The occurrence of any of these events is sometimes referred to as “constructive emancipation”.

The principle underlying “constructive emancipation” is that when certain events occur, the relationship between the parents and child is altered in such a way that the parents should no longer be obligated to pay child support for that child.

A child may be considered emancipated, and his or her parents relieved from the duty to pay child support, if the child:

In these situations, New York courts have held that by taking these actions, a child may have has forfeited his or her right to support from the parents.

Getting married and joining the military are clear and well-defined events that give rise to a child’s emancipation.  Establishing that a child has achieved economic independence or that a child has abandoned the parental home can be more difficult to prove.

Another factor in deciding whether a child should be deemed emancipated based on the doctrine of constructive emancipation is the cause of the child’s constructive emancipation.  If a parent is seeking to terminate his or her child support because the child has abandoned the parent’s residence to avoid parental control, or the child refuses to have any contact with the parent, the court will want to why the child has undertaken this course of action. This information will help the court to determine if the child had good cause for his or her actions.  If good cause is shown, the child may still be eligible for support from the parent even if the child continues to refuse contact with the parent.

Using The Doctrine Of Constructive Emancipation To Modify Support Orders

Consult A Family Law Attorney For Advice Regarding Constructive Emancipation

Seeking to terminate child support based upon constructive emancipation is a drastic step.  Because these claims could result in financial hardship for the custodial parent and the child, Courts examine such claims very closely and delve deeply into the true reasons for the breakdown of the parent-child relationship.

If you are considering making an application to modify or terminate your child support obligation based upon constructive emancipation, or if you are a custodial parent who has been notified that the other parent is taking such action, contact our family law office at 914-361-5500 right away. Our attorneys are devoted exclusively to family and matrimonial law and have the skills and knowledge to advise you through this complicated legal step.

She is also a Certified Financial Litigator with the AACFL and is featured in Super Lawyers in 2018-2020. She is a partner in the firm of Ressler & Associates in Westchester County. She is a member of the panel of attorneys for children in Westchester and Putnam Counties.

Custody/Visitation and Child Support During COVID-19

These are unprecedented times we are living in and with that comes...

Spouses Who Hide Their Money

Separating from a spouse isn’t always the battle many perceive it to...